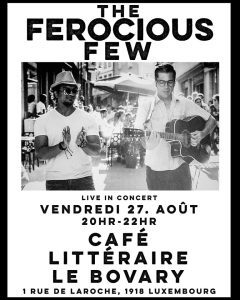 “…the Ferocious Few serve up a raw, real platter of rock and roll. With a twist of punk and a bit of rockabilly, the Ferocious Few come together to make their own blend of rock, inspired by the state of the country, life experiences and their personal music collections.”

Continuing to prove that good quality music with an influential message is still being sought after by the listening public, Francisco Fernandez (2002) and the Ferocious Few (2005) have spent the last sixteen years gaining ground with audiences around the world.

The Ferocious Few is made up of Francisco Fernandez as lead singer and spunky left handed guitarist, along with drummer Daniel Aguilar. European drummers include Jeremy Black and Felix Ritz (depending on location).

Francisco and The Ferocious Few started out busking (street performing) and playing small bars in 2005. Their rousing guitar riffs and drum kicks brought in good daily wages and the attention of larger California stage venues such as The Great American Music Hall, Saratoga Mountain Winery, Bottom of the Hill, and The Independent San Francisco.  In 2007, The Ferocious Few broke into the rock scene when they opened for Steve Miller and Joe Cocker respectively. After releasing two CD’s independently, the band released “Juices” under the Birdman Records label (2010) and returned to DIY with “The Ferocious Few” in 2015 followed by a re-release in 2018.

Francisco has also toured solo all across the USA with a stop at the Beatles 50th Anniversary concert in New York to co-host and perform at the iconic event.

Francisco Fernandez is currently calling Germany home with the hopes of building a business market worldwide.

At present, multiple projects are on The Ferocious Few’s plate. The band is prepping to enter the studio in the near future to hammer out some brand new tunes for their fanbase. Fifteen new songs have been completed and may be heard along with the band’s past favorites as they embark on a 2019-2020 Western US multi city tour. Follow The Ferocious Few on Facebook to get an up to date tour schedule and learn more about this “rollicking, soulful, garage-rock” band.