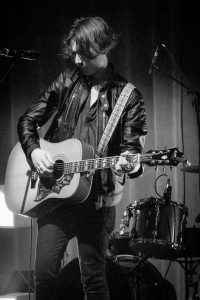 Kevin Heinen is a singer/songwriter and musician from Luxembourg, best known for being the frontman of local pop/rock band CHEAK!
Kevin actually started out with blues music in his early career, transcending into singer-songwriter music inspired by the likes of Damien Rice with his first band KHB. This band later got revived under the name Deep Dive Culture, until the members split. Kevin also became a member of the Songwriter Core of the Grund Club Asbl, an assembly of singer/songwriters around the country and started playing the bass guitar for the band Creatures on Mars. Currently, while working with CHEAK!, Kevin is working on a new, secret project in which he tries to channel his love for Emo and alternative rock.
When playing solo, Kevin is playing songs from all the projects and bands he is or was in, as well as some songs he wrote alone, in an acoustic format.